A downloadable visual novel for Windows, macOS, and Linux

A short Visual Novel to raise awareness about the persecution of Falun Gong in China. It was originally created as an entry for the "branching story" contest held in 2009 by "Citizens for a Global Solution" (a kind of human rights organization).

Since it is about human rights, the style of this visual novel is perhaps a little unusual. Instead of drawn backgrounds etc. there are real photos and the few drawings that exist are deliberately not cute. The story is based on real events (mostly an asylum application from a friend of mine) and the photos are actually taken from the persecution of Falun Gong. The names and personal information are fictitious though (the good end is also fictitious).

Since there was not much time left until the closing date of the competition, there are still spelling mistakes and the game doesn't look cute or professional. The game is also not meant for children, as some of the photos are a bit shocking.

I actually came to itch io looking for anti-CCP games and I guess this is at least close to being one. But in any case, I enjoyed it. I seriously need to stop thinking of visual novels as boring to play.

I mistook Liu as a male at first! She had short hair and thick eyebrows...

Although the game is not meant for children, if the player is an adult, then...IMO chances are...he would actually know the persecution of Falun Gong in China. I'm an adult player though I played this game because, as I mentioned, wanted to play anti-CCP games. Human rights issues like this are one reason I hate the CCP.

I faced a bug and am not sure whether it's because of the renpy engine. But the options menu (or something else such as previous dialogue lines) may still be visible when you're out. But at least it resolved itself when the scene fades to black temporarily. 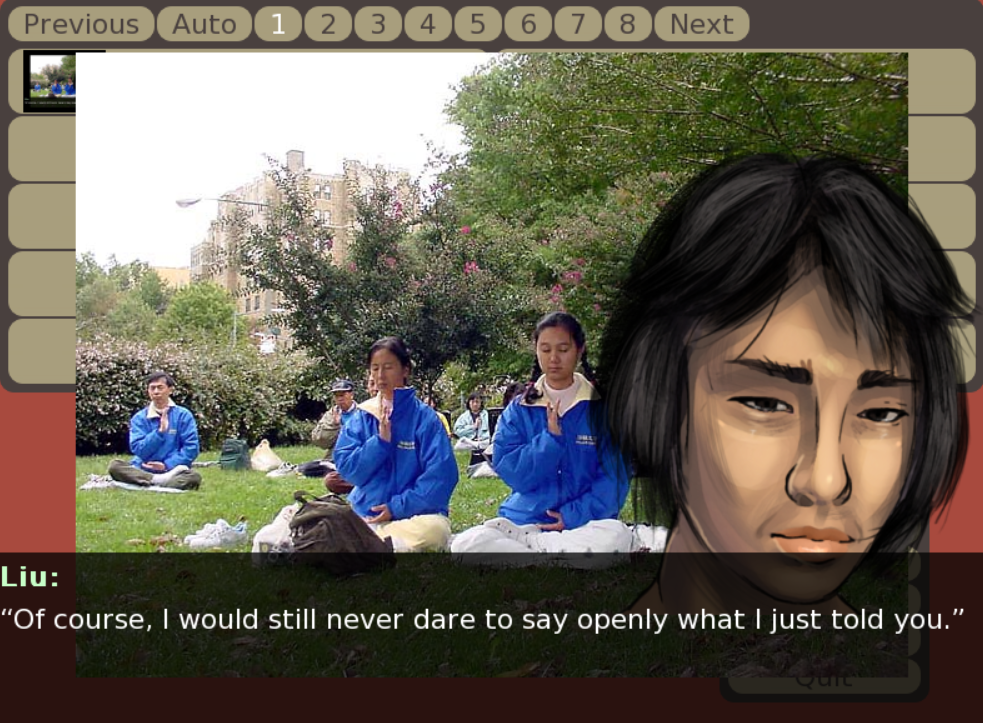 I also made an anti-CCP game and it's way way way more extreme your game (go to my page and see for yourself what it is...absolutely no blood or gore though, but you'll see what I mean). But of course I don't promote violence, in real life, that is. Especially when not provoked.

Btw guys, make sure you read the README for the controls before you play the game. To play it, you need to run the application file called "choice".

The choices and actions of the Falungong practioners leading to the good ending were creative, I must say! I honestly wonder if it would be possible for the Hong Kong protesters to do the same back in 2019, holding each other tight in order to resist arrest. If the police shoot them, it'd look like bad publicity for them. What do you think? 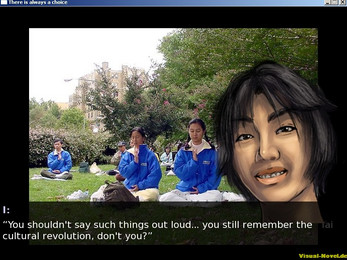